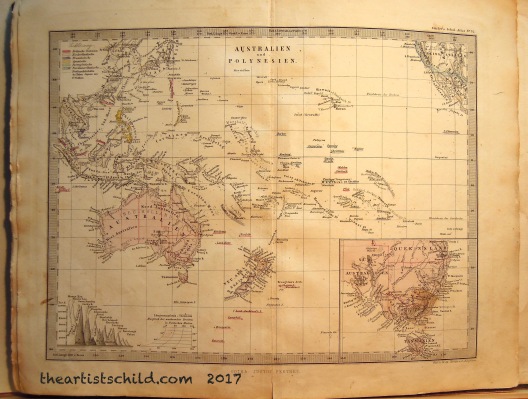 Interesting tales attached to objects are for me what gives them value. The more bizarre the better. The following is a poem inspired by two items and a family story.

The Broken Club and the Half Eaten Atlas

Safely kept were the tribal club and atlas

Left behind by a missionary man

Some friend of an ancestor

Then the club was broken in two

By one boy who

Used it to strike the floor

And the book found under the house

Half eaten by a rat or mouse

A resident of Sydney

Who went off to New Guinea

Or so I’ve been told

In the late 19th century

And was eaten by cannibals 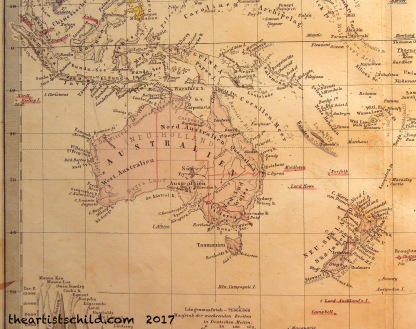 There is a story in our family that a German missionary left some of his possessions in storage with a relative.  The Aboriginal war club (waddy) and Stieler’s Schul Atlas are all that remain.  He was supposedly eaten by one of the New Guinea tribes of headhunters and this was why he never returned to collect his things.  The war club (broken by an uncle when young and mended with some waxed flax by me) is the type of weapon used to attack enemies in tribal battles.

While I am usually dubious about the veracity of such sensationalist tales, I think that the story is most likely true because it came from a branch of the family that was quite reliable.  They were very honest and practical and not the types to make up fanciful stories.   Ellie and I thought that we would investigate this further to see if there was any actual documentary evidence available.

The name Gottlob Rembold and a Sydney address are hand written in the Atlas.  We Googled his name and this has made the story stranger and more complicated.  In Sydney in 1881, a Gottlob Rembold at the age of 27 was charged with shooting and wounding his uncle in the chest with intent to murder.  Apparently this Gottlob was a young man from Germany, who came out to Australia in 1880 to live with his aunt and uncle, a farmer, probably after the death of his father.  There was a dispute about a large sum of money in a will that he claimed was his, but his aunt said it was left to her.  Gottlob also claimed that he had been mistreated since his arrival from Germany ten months before.  Gottlob was found guilty but the sentence was remitted with no reason given.  There is a prison photo of Gottlob but we can’t show it as it is subject to copyright and  only available to view by Ancestry.com members.  It is not a mug shot, but a normal studio portrait and he was a good-looking young man.

His was not a common name in Sydney at the time so it is surely the same person.  The atlas has a date of 1876 and this is when this Gottlob was 22 years old and might have been contemplating travel.  After his release from prison he could have gained assistance from a religious organisation and then decided to become a missionary.  Gottlob had been employed as a gardener so this was a change of direction.  Not that it did him much good.

Gottlob’s story is part of the rampant Western Colonialism that took place around the world in the late 19th and early 20th centuries.  Probably if Rembold had been a medical missionary or an Anthropologist he would have survived.  As opposed to some of hardline missionaries of the period, they tended to respect the host culture and were not perceived as a threat so usually lived to write about their experiences.  Gottlob must have made enemies if he had such a nasty fate.

Not all family stories are sweetness and light and the sad and bad characters can be just as inspiring as the heroic figures.  Was Gottlob a naive young man mistreated by his aunt and uncle or was he an opportunistic, murderous fortune hunter who turned to religion?  We will never know the whole truth about his end unless we can find a death certificate.  Without more information one can only imagine the mysterious and violent demise of the unfortunate Gottlob Rembold.

To lift a rather dark story the following is a live version of Rage Against the Machine’s protest song Killing in the Name by my favorite string quartet, Sydney group “FourPlay String Quartet.” They can really rock the strings.  Ellie and I saw them perform this same piece in concert and it was electric.  The members of FourPlay are all fantastic musicians and composers and their own music, while influenced by the past, is of our time.   In recent years they have collaborated in performance with Neil Gaiman.  Check them out on YouTube.

writes a short story every week