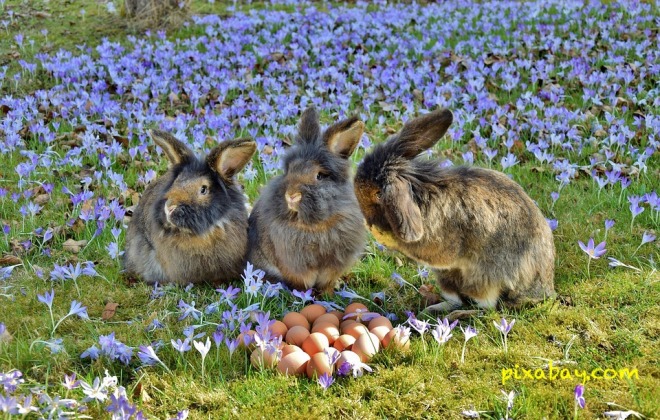 Many in Australia are about to celebrate Easter with its symbols of renewal in the form of eggs distributed by the Easter Bunny, which may have originated with the Moon Hare, associated with the German Celtic goddess Eostre (or Ostara) who bestowed eggs at spring festivals. As always the spring theme seems in opposition to our autumn weather with the days gradually cooling down and the chill starting to set in, especially at night. Still people persist with the symbols of spring and look forward to decorating real eggs or eating chocolate ones. Chocolate rabbits are also very popular, as are representations of this furry animal, which I find quite ironic, as it is one of Australia’s worst introduced pests, which many have tried to eradicate from the landscape to no avail. So why are rabbits still so popular here? 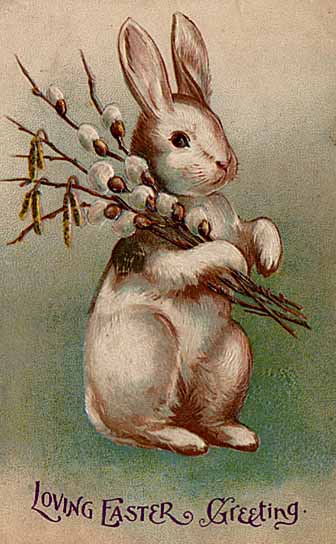 Because of the damage this creature has done to the Australian environment there have been attempts to replace the Easter Bunny with the beguiling native Bilby, a marsupial bandicoot that has big ears, a long tail and hops. Unfortunately the bilby is endangered and is not as prolific as the rabbit, which competes for burrows and food. There is an extensive breeding program and these animals are being reintroduced back into the desert regions where they normally live. You can find delicious chocolate bilbys as gifts, which help to support these programs.

It will take a lot to replace the Easter Bunny with a Bilby. The rabbit is a spring fertility symbol because it is so prolific and has managed to survive no matter what humans throw at it. For centuries cooked rabbit has prevented people from dying of starvation during lean times. Also you can keep rabbits as pets while the bilby is a protected species and can only be kept by qualified wildlife carers. The bilby is very sweet but rabbits have the cuddly pet factor on their side. While the rabbit might not be great for the bilby, chocolate does not discriminate and you can enjoy both versions at this time of year.

Rabbits are cute. It is hard to resist their allure and toys and figures of rabbits are popular to collect. Ellie and I have a small fun collection of rabbits that can be put with eggs or as alternative decorations. I decorated a small dead tree, appropriate for autumn, with some wooden hanging rabbits and have placed this in our front hall. 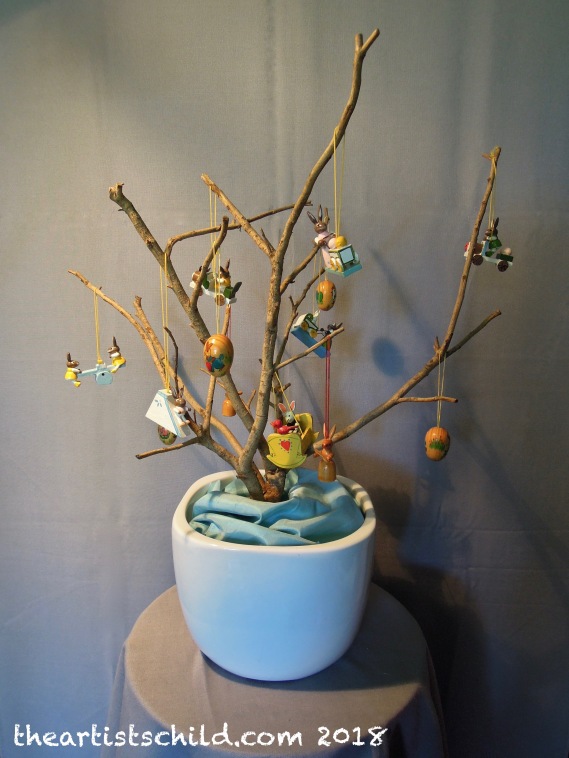 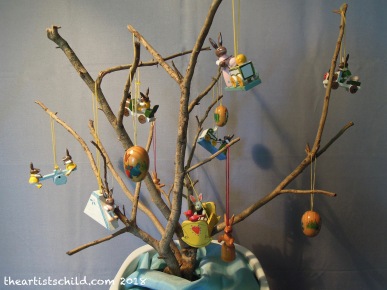 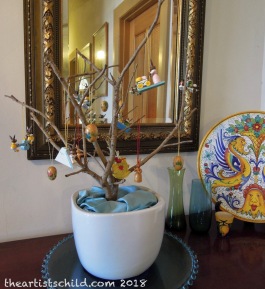 We have some quaint vintage textile rabbits that look good in a basket. Two are handmade, one knitted and the other made from felt. 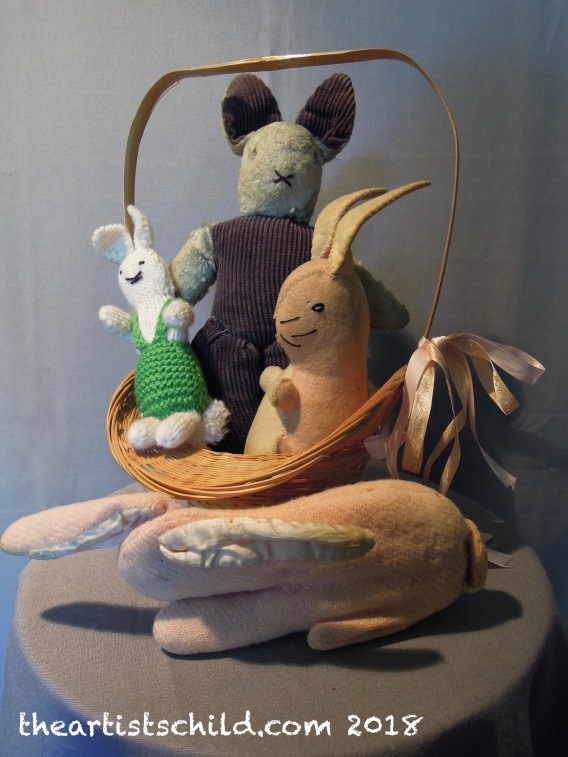 One of the world’s most famous literary rabbits, who existed long before the infamous Marlon Bundo, came in a little bag. It is nice to see his illustration in 3D form. 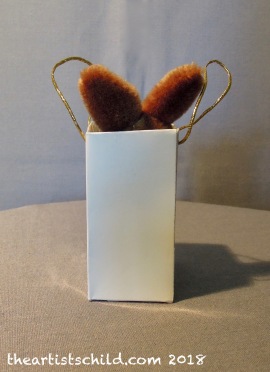 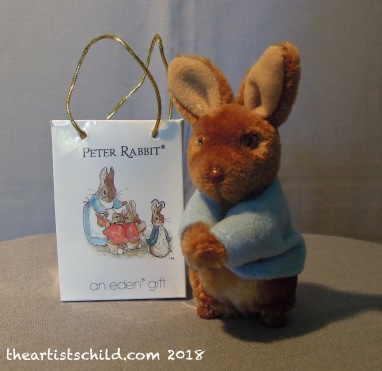 Small rabbit figurines are good to collect as they take up little space and are made from all kinds of materials. Here are some glass, china and pewter examples. 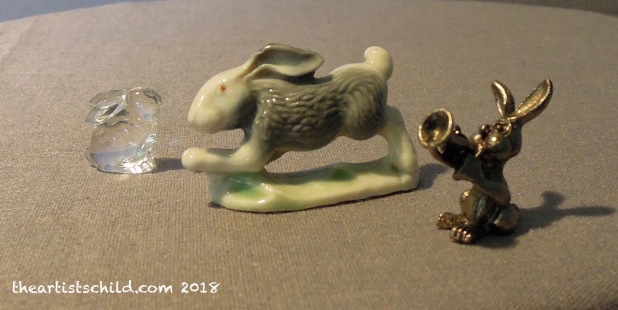 Rabbits are also used to decorate eggs. A Chinese babushka style egg displays a rabbit family and there is an empty innermost compartment where you can place a chocolate egg to surprise the recipient. 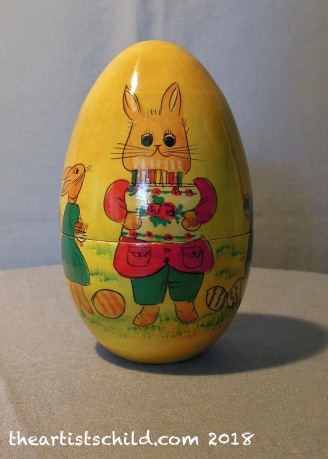 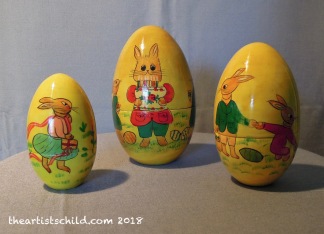 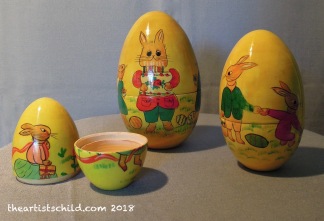 The rabbit is one of the Chinese Zodiac animals, popular in Asian countries and adopted by many other communities. We have a small collection of Japanese rabbits. There is a vintage 60s flower power papier-mâché money box in the shape of a rabbit; three beautiful textile rabbits wearing kimonos and a tiny pair of wooden rabbits inside a shrine-like structure which is a good luck symbol for marriage. 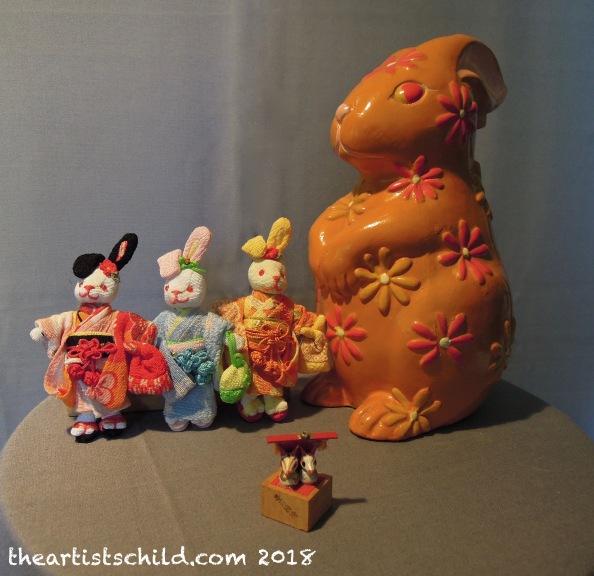 Rabbits have endured as a fertility symbol and are popular for so many reasons. While they may not be wonderful out in there in the Australian bush and it is a good idea to support the bilby, rabbits do make cute pets. They have inspired stories and other creative arts and crafts. Let’s face it, rabbits make you smile and that’s a good enough reason for having them around.

Wishing everyone a Happy Holiday season no matter what you celebrate at this time of year. I’m having a couple of weeks off blogging to recharge the creative batteries, so see you later in April.

The following song by Australian Indie band, Boy & Bear is called Rabbit Song. It doesn’t have much to do with rabbits, but the song is a delight and the video is wonderfully creative.