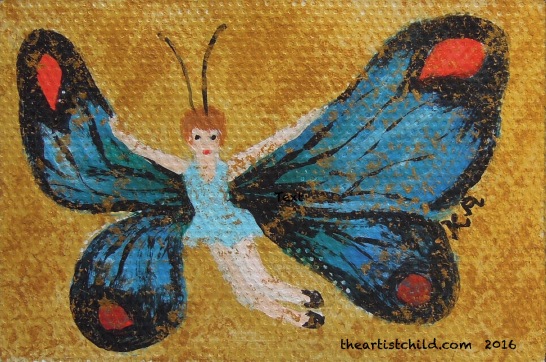 Watching colourful butterflies in our garden the other day reminded me of our childhood obsession with fairies.  Ellie and I listened with fascination when our parents read stories from illustrated fairy tale books and we played make-believe fairy games in the garden.  In December we had the lovely, paradoxical combination of both the summer fairy world and the winter wonderland of Santa.  The belief in an enchanted world of fairies, elves and a magical being who brought gifts on Christmas night, helped to develop my love of imaginative imagery and fantasy.

Fairies bring magic to the world of children and no wonder they are as popular as ever.  I remember visiting the Ola Cohn Fairy Tree in Melbourne’s Fitzroy gardens as a child and being fascinated by the carved fairies, elves and animals that I thought would move when no one was watching.  Our grandfather would take Ellie and I to the fern gully at the Royal Botanic Gardens.  We called it the Fairy Dell and grandfather would point out the fairies floating under the fronds.  We would see them because our belief was so strong.  Another time he gave us a rock that had a mushroom growing out of the moss on top and told us that this was a fairy house.  The mushroom and moss are long gone but I still have that rock. It was special.

In my room hung a print of fairies trooping in a forest (The Fairy Way by Margaret Winifred Tarrant).  I loved that picture and I have it stored away as a memory of childhood.  One summer holiday Mum made us some wings out of wire coat hangers and pantyhose and we would dance around in our ballet leotards or swimsuits pretending we could fly.  I don’t know what happened to those wings.  They probably fell apart from repeated flapping.  If it were too hot outside we would create a fairy house by covering a table with a sheet and play underneath.  We found inspiration for our make-believe games in books.  My favorite Australian fairy books were about the gumnut babies, Snugglepot and Cuddlepie, by May Gibbs and The Little Green Road To Fairyland, beautifully illustrated by Ida Rentoul Outhwaite.  I loved the fact that the fairies were depicted in the Australian landscape with native animals and gum trees so it was easy to imagine them in our own environment.  The fantastic fairy tale illustrations by Arthur Rackham were other favorites.  We still have these books because they are timeless.

It was fun being allowed to stay up late to watch the old 1930s version of A Midsummer Night’s Dream starring Mickey Rooney as Puck on TV.  Although it was in black & white, the film captured the dreamlike world of the fairies and brought Shakespeare alive.  I saw it again recently and it is both an ethereal and humorous version of Shakespeare’s play, despite the basic special effects.  We also enjoyed the 1951 British movie version of Dickens’s A Christmas Carol staring Alastair Sim as Scrooge, which usually screens around this time of the year.  The jovial “Ghost of Christmas Present” was a version of Santa Claus.

Like many children, we would visit Santa’s Grotto at a city department store, make our gift wishes and have our photo taken with a perspiring Santa, who always looked like they were about to collapse from heat exhaustion.  It can’t have been an easy summer job even with air-conditioning.  On Christmas night we would leave out a drink and a snack near the fireplace despite the fact it was unlit.  Because it was summer, dad said that Santa would prefer a beer, not milk, as delivering presents was thirsty work.  We were innocent children and it never occurred to us that if everyone did this Santa would have become inebriated.  He always drank his beer.  Waking up at 4 am to the presents hanging on the end post of the bed was always exciting.  We could never wait till daylight.  Ellie would come into my room and we’d unwrap everything together as this was much more fun.

I think I was in the fourth grade at school and mentioned what I wanted from Father Christmas and another girl said, “you don’t still believe in Santa, it’s your parents”.  I was shocked and devastated.   She was not one of my friends and probably said it to be superior.  Because I did not want Ellie to have the same bad experience, I decided to let her down gently and told her that our parents handed out the presents on Santa’s behalf, because he could not get all the way to Australia in one night.  I wish that our parents had told us the truth rather than leaving it to chance.  It is always sad when childhood beliefs are destroyed by some unkind, thoughtless person.  I bet that girl is still a sourpuss.  But the world did not end and it was just a part of growing up.

I don’t remember when my belief in fairies ceased.  I think that it just gradually faded away.  Probably the Santa incident was the beginning of the end.  The tooth fairy vanished after I gained my second set of teeth.  Without that cash incentive she became redundant.  Maybe fairies start to disappear as we learn to cope with the realities of life, but it is hard to forget their magic.

As an adult Myths and Folklore are still important.  I find modern fantasy artists who depict the fairy realm very inspiring.  One of my favorite painters is the British artist Josephine Wall, who produces beautiful, incredibly detailed paintings of the world of fairies and other mythical creatures.  I also love to read fantasy novels and watch films that are based on old fairy tales.  Probably the first book that I read on this subject and still one of my favorites is Faerie Tale by Raymond E Feist, with its references to Celtic mythology.  Quite scary and definitely not a bedtime story for little children.  A masterpiece of the fairy tale genre is the 1940s French film La Belle et la Bete (Beauty and the Beast) directed by Jean Cocteau.  With its living statues, the Beast’s palace is deliciously creepy and surreal.

Fairy tales still capture my imagination and have been an inspiration for my songs and art.  I have made cards with fairy and Santa images to accompany gifts for friends and relatives and will continue to be influenced by these mythical beings and will try to bring them alive.

And hey, if the Irish and the Icelanders will not harm a fairy tree or move an elven rock because this will affect the fairies and elves who dwell there, who’s to say they are wrong. The natural world needs all the help it can get.

So if anyone asks, “do you still believe in fairies?” I will answer’ “Yes, I believe in the idea of Fairies” and that will be the truth.   And as for Santa, he is everywhere whether you believe in him or not.

(There is a lot more to read and view if you click on the text links in this post, including the full version of the movie, A Christmas Carol).