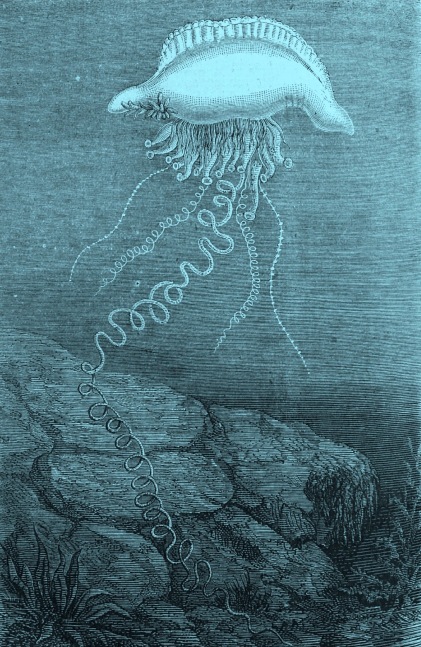 Physalia Utriculus (from The Ocean World by Louis Figurier, 1872 Edition)

The natural world is full of many bizarre and fascinating creatures, especially the sea. For us land lovers who do not venture far out beyond the sand, anything living in the ocean seem most mysterious and more alien than a science fiction monster. One such life form is the “The Pacific Man of War” (physalia utriculus), cousin to the larger “Portuguese Man of War,” that inspired the following poem:

Sails the waters of Australia

Stun the prey of hermaphrodites

No armistice with final rest

Illustration by F Seth from A Sketch of the Natural History of Australia by Frederick G Aflalo, 1896

Lately I have been looking at some 19th century natural history books that came from relatives. I was particularly taken by a couple of illustrations of “The Pacific Man Of War,” and its scientific name.  Not many words rhyme with Australia.

These are commonly known as “Blue Bottle” jellyfish in Australia, although they are not a type of jellyfish. In fact they are related to corals. The Physalia are actually a large colony of separate polyps carried under the floatation bag, itself an individual life form. The polyps perform various functions such as catching prey (the tentacles), waste disposal and reproduction.

Blue Bottles can become stranded on ocean facing beaches along the east coast of Australia. They are more common the further north you travel and are considered a hazard when they wash up in large numbers. Physalia can give a very painful sting to any swimmer who bumps into their tentacles, which also remain active when lying on the beach.

Although not a frequent visitor to Victorian beaches the occasional individual can drop in as the following video demonstrates. Despite their bad reputation, seen in close-up physalia are beautiful and mesmerizing creatures.