Creativity isn’t just about making art. It is also about solving problems. Sometimes you come up against an obstacle in your life, whether physical or mental, that seems impossible to remove so you must find a way around it. This may involve a bit of rethinking of the situation to find a satisfactory solution.

In some ways we create our own obstacles with thoughts like “I must wait until this or that happens before I can do such and such.” I know I am guilty of this type of thinking at times. Dishwashing is my least favorite housework activity. It never stops and I would rather use the time for creative activities.  Before we had our renovations several years ago we could not fit a large dishwasher in our kitchen. We previously had a bench-top dishwasher that had given up the ghost and the brand was not longer available. We thought that we could not get a new dishwasher until we had renovations, which still required a few more years of savings.

A friend who was renting a house said that this was stupid and we were putting up unnecessary barriers. She had bought a second hand mobile dishwasher that could be attached to a tap without it needing to be permanently installed. We did not have the space for this so looked around and eventually found one made for caravans and put it on a shelf near the sink. This worked well and when we finally had our renovations we sold it to someone who needed a small bench dishwasher for their workplace. So our problem was solved and we got around an obstacle that was driving us crazy. 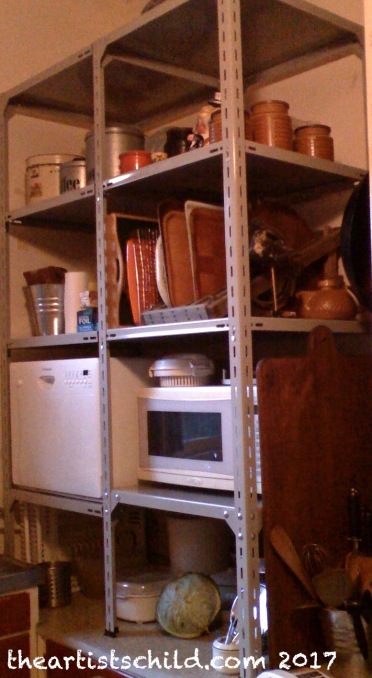 Lack of money is often an obstacle to doing things but you can usually work your way around this problem. Still on the subject of renovations, our finances did not extend to putting in a new bench and a linen cupboard in the laundry. It previously lacked a bench and had some large old wooden shelves, which took up too much space. We reused an Ikea stainless steel bench and some industrial metal shelves that were in the old kitchen, together with an Ikea drawer unit on wheels that had been in the laundry. With a new marmoleum (linoleum) floor and freshly painted walls the room looked more spacious. Reusing existing items gave us what we needed. Just because you don’t have the money does not always make a situation impossible. A compromise can work well.

When in the middle of any kind of project you can run into problems and these should never be an obstacle to getting it finished. Just think of Michelangelo. When he was carving his figures he sometimes came across flaws in the marble and would have to adjust the composition accordingly. We might not all be Michelangelo’s but we can take a leaf out of his book and think on our feet if some difficulty pops up in the progress of our work.

Seeing beyond an obstacle is sometimes what is required to solve a problem. After playing my ukulele and singing before an audience for a while, I suddenly developed stage fright and became extremely nervous. Performing was now more stressful because of anxiety. I knew this was ridiculous as I really enjoy singing so looked up ways to cope on the Internet. As with most skills in order to build confidence you must practice and practice so that you know your material thoroughly. If I imagine the audience as friendly and ready to be entertained, I can look beyond my anxiety and have fun. I will never be able to get rid of my nerves completely but they can be used to increase the energy necessary for a good performance. Now I can control them rather than the other way around and I look forward to performing.

Even if you cannot remove an obstacle it need not become a huge barrier in your life. Try to work around the problem, be flexible and use creative thinking.

As a child one of my favorite performers was Jerry Lewis. I loved watching his films on TV. He was a comic genius and always seemed to be confronted with some kind of obstacle that led to hilarious situations. I like this scene from The Bellboy (1960), which uses visual comedy to great effect.

Looking for horror? ...Come in.