Sometimes what creeps us out can also inspire creative works. Under normal circumstances I don’t mind ants, especially Australian native black ants and even stinging bulldog ants provided they keep their distance. But when ants start to invade our inside space that is a different story.

Invasion of the Ants

Crawling on the computer

Down halls, up bathroom walls

Normally ants are benign, beneficial insects when they are part of their home eco-system. Their organization, co-operation and industry as a group has inspired stories since the time of Aesop’s Fable, The Grasshopper and the Ants. 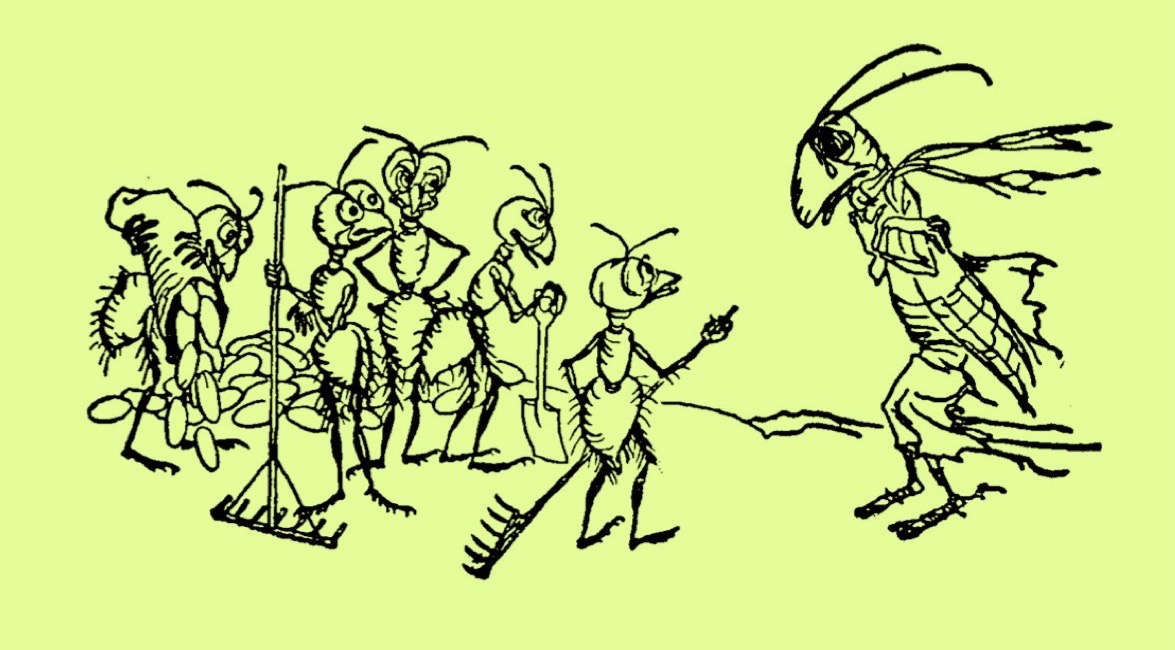 The Grasshopper and the Ants by Arthur Rackham, 1912

Outside of South America, because of their sheer numbers, argentine ants have become a huge problem in the world (How the World became a Giant Ant Colony). Accidentally transported in ships, they now infest every continent except Antarctica. These transported ants are all genetically related and do not have the biodiversity of their species at home. Separate nests do not compete or fight one another and instead have formed into super colonies that span kilometers. Melbourne has one that stretches for at least 100km (discovered in 2004), California has a 900km super colony along the coast and in Mediterranean Europe, 6,000km (The Ant Super Colony) ). They kill and take over the territory of native ants and are causing damage to whole eco-systems. The following is a short Australian documentary that explains how these ants are so successful around the world using amazing wildlife photography.

Early attempts to eradicate the ants were quite basic. In 1960s Sydney small boys were encouraged to find nests and were paid $10 for their trouble by the government. This would have seemed a huge amount of money to children at the time. A 1967 Pathé newsreel tells the story.

We have had argentine ants in our garden for a long time but when the house next door came down last year, the ants from next door moved into our place. Their numbers have swelled considerably. The weather has been quite mild, without much rain so there has been no help from nature to control them. If there is just one crumb on the kitchen bench the ants will find it and they are attracted to any water in the bathroom so cleaning is endless. When an ant appears next to you on the bed sheet you know there is a problem. Looks like we will need professional assistance to reduce these pests. There are now products that are reasonably safe to spray outside if you keep your pets out of the way during the operation. This invasion has brought back some unsettling memories about ants.

There is something about a huge plague of creatures that can both repel and fascinate us. This is often the basis for horror stories and movies. One of the first scary films I remember watching as a child was The Naked Jungle (1954) starring Charlton Heston based upon a short story, Leiningen Versus the Ants by Carl Stephenson. In it an Amazonian plantation owner has to contend with the threat of ravenous army ants destroying his crop. I watched this late at night with some friends at a sleep over and we all screamed during the scene where an unlucky worker is eaten by the ants (until the host’s little brother started doing a mock reenactment that made us laugh). I hope the actor was paid well for having so many ants crawling all over him. Not for squeamish.

Although the premise is exaggerated for dramatic purposes, the idea of unstoppable, carnivorous ants plays on our primal fear of the uncontrollable powers of nature. We create the nightmare in our minds.

In the horror film Them!, also made in 1954, ants have become huge monsters. I saw this movie late at night as an adult and it still has the power to disturb, although modern computer graphics produce more believable monsters. The trailer gives a good idea of the horror-inducing mood created by the filmmakers. The giant ants were meant to be the result of exposure to radiation from the atomic bombs. At a time of cold war tensions it played upon everyone’s paranoia surrounding the nuclear threat, which became terrifying ants.

Because ants work together this makes them seem like us on the one hand, but being insects, quite alien on the other. I’m sure many sci-fi alien societies are based upon ants. As invaders, ants are worthy opponents and will continue to inspire, frighten and mesmerize us in works of fiction and artworks.

Of course the appropriate music for this post after all the apocalyptic doom is Ant Music by Adam and the Ants. This live version was filmed on the Australian TV show Countdown in 1980. The sound is better than the official video. He also did a song called Ants Invasion but it is not as catchy. “Don’t tread on an Ant, he’s done nothing to you….” Huh! Obviously Adam Ant had not experienced argentine ants in 1980.