I had just written the first draft of this post and showed it to Ellie.  She read it and said, “no one wants to read about someone’s dog. It is too personal and boring.”  Of course she is right.  Anyone who has a dog thinks that theirs is the smartest, funniest dog in the world and they don’t want to hear about other people’s dogs unless it is an interesting story.  Taking on board what Ellie said I had a rethink and decided to write about dogs as a source of inspiration for artists and writers and how they have influenced my own creativity.

Dogs have inspired many works of fiction.  For example Jack London’s The Call of The Wild (1916), about the adventures of the Alaskan Klondike sled dog, Buck, Eric Knight’s 1940 novel, Lassie Come Home and Dodie Smith’s 1956 novel the 101 Dalmatians to name a few.  And who can forget one dog’s life story in Marley and Me (2005) by John Grogan.  These books were all made into popular and enjoyable movies.

Dogs as companions have produced entertaining characters like Scooby Doo from the cartoon TV series and Snowy in The Adventures of Tintin by Belgium cartoonist George Remi (Herge).  Generations of children have loved reading about the dog Timmy in Edith Blyton’s Famous Five books.  The French movie The Artist  (2011) benefited from the wonderful antics of the Jack Russell, Uggie and Eddie (Butch) provided many hilarious scenarios in the TV series, Frazier.

True stories about the incredible feats of dogs are also inspirational.  The Maremma Sheepdog used to trial their use for guarding Fairy Penguins against predatory foxes on the coast of the Victorian town of Warnambool, inspired the Australian film Oddball (2015).  There is also the successful Australian movie Red Dog (2011) based on a true story with a sequel in production.

Google songs about dogs and there is a long list.  Often they are used as metaphors that are not always flattering to dogs but more about human nature.  From old classics like Hound Dog (Elvis Presley) to anthems like Who Let the Dogs Out (Baha Men), these songs have kept our feet tapping.  Some beautiful songs have been written about dogs.  Cat Steven’s I Love My Dog, and Nick Drake’s Black Eyed Dog from the 1970s are just some of the many.  I have written a couple of songs about my dogs.  They are very personal and were a way of dealing with their loss.

There are so many stories, television shows, movies, songs and about dogs I could go on for pages and I have only mentioned a few.  But you get the point.  Dogs are popular subjects because they trigger strong emotions, whether in a story or as a symbol, that can generate creativity. 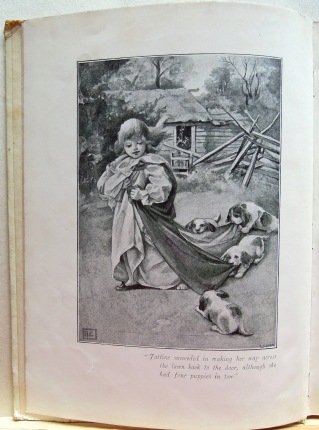 Frontispiece, Tattine by Ruth Ogden, circa 1901 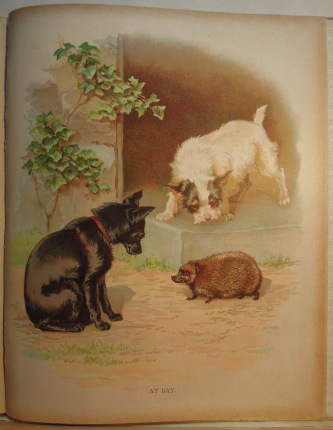 At Bay, Country Favourites, circa 1901

Our connections with dogs makes it hard to resist drawing and painting them.  Visual artists have created wonderful depictions of dogs to illustrate books.  I have a couple of early twentieth century children’s books with some lovely illustrations of dogs.  Tattine by Ruth Ogden (circa 1901) is full of sweet black and white paintings of a little girl, many with her puppy.  The frontispiece has a lovely watercolour of some puppies pulling at her night-clothes that has used typical behavior.  In Country Favorites (circa 1901) is a charming colour picture of two terriers watching a hedgehog.  As the owner of a terrier, I know this is in the realm of fantasy as they are hunting dogs and would not be leaving the poor thing alone.  But then again the hedgehog’s spines could be a deterrent and a realistic image would not be great in a children’s book.

Amongst my greeting card collection, I have several with images of children and dogs from the nineteenth and early twentieth centuries.  A dog is a popular subject because anyone who has owned or loved dogs can relate to these works.  There is nothing like having the devotion and loyalty of a dog.  In fact in Medieval Flemish paintings dogs were included as symbols of faithfulness.

The actions of our own dogs have given both Ellie and me ideas for artworks.  We both like to do drawings of our two Fox Terriers.  Usually you can only get them to pose when they are asleep as they are in constant motion.  Ellie did a watercolour pencil sketch of her current dog that I really like and have included it below.

You hear all kinds of stories about dogs rescuing people from dangerous situations.  One day when I was upstairs, our previous two Foxies started barking furiously at the side gate.  I went down to have a look and got to the front of the house only to see that someone had broken a window and the door was ajar.  The intruder must have heard me coming.  I saw a leg disappearing around the corner and yelled some rather strong language before calling the police.  I had not heard the door knocker and if the dogs had not barked so loudly and in such an agitated manner I would not have known there someone was breaking in to our house.  This episode became a tapestry design and I have included one of the working drawings in this post. 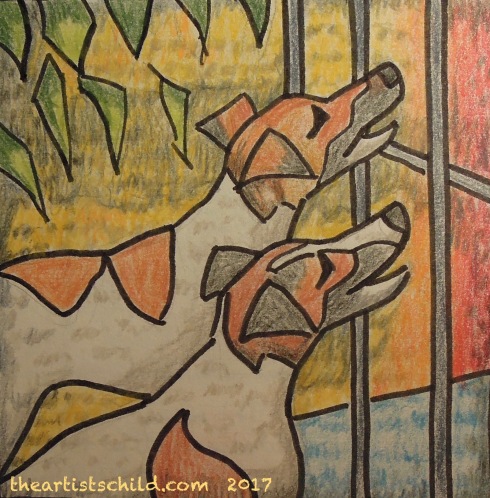 Drawing for Tapestry Design by Kat

It is obvious that I love dogs.  Dogs have always been important in my life and I could not be without one.  I think it is essential to have a dog (or cat) if you work at home. Talking to your pet is a good way to work through an idea.  Better than talking to yourself which can look strange if someone catches you doing this.  But with a dog it is perfectly normal because they listen intently. You just know when they think your idea is rubbish.  Dogs do sneering well.  But when your enthusiasm for something is conveyed to them they take up the good feelings and go with it.  You know you are on a winner when your dog smiles and wags his tail like crazy.

Dogs can be heroes, counsellors, entertainers and best friends amongst their many traits and this makes them perfect subject matter for creative work.  If you work at home and spend a lot of time on your own it is so easy to get caught up in your work and a dog keeps you connected to reality.  We benefit in so many ways from our relationship with our dogs and should never take them for granted.  Dogs are always an inspiration.

The following video shows a compilation of clips from 1930s films starring the wired-hair fox terrier Skippy.  Skippy starred as “Asta” in The Thin Man films with William Powell and Myrna Loy, as “George” in Bringing Up Baby with Cary Grant and Katherine Hepburn and as “Mr. Smith” in The Awful Truth with Cary Grant and Irene Dunne.  This delightful dog’s actions are put to the song Who Let the Dogs Out performed by Baha Men.