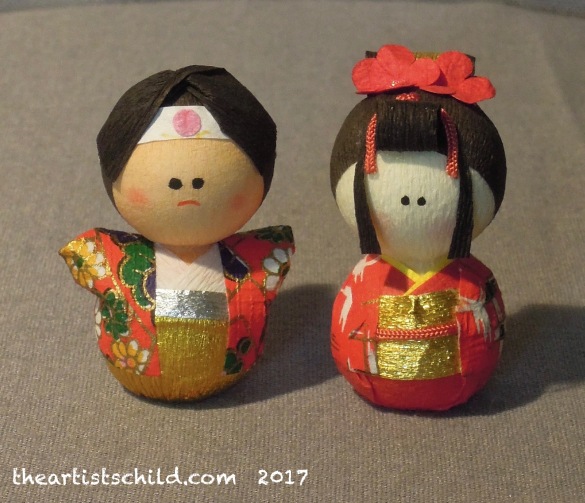 I was looking at some of our Japanese doll collection and noticed that the simplified faces were like emoji, first used by the Japanese in mobile phones. These traditional dolls have been around for a long time so maybe this type of art inspired the creators of emoji.  The following photos demonstrate the similarity.  But whether there is any relationship or not it is still fun to speculate and to enjoy the skill and creativity of Japanese doll art.

The paper dolls above are tiny examples of the art of using origami (folded paper) to make beautiful paper dolls.  The boy on the left has a thoughtful expression while the girl’s face is blank so I would liken them to questioning emoji faces.

The above traditional wooden kokeshi dolls are from the mid-twentieth century.  The girl and the older woman with a child both have a very typical calm expression but the little boy is smiling brightly to indicate youthful happiness. 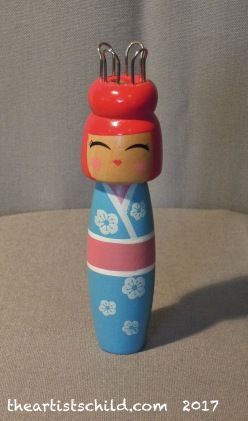 Love the look on the face of this Japanese pin knitting doll that I bought to use for my textile work. She seems to be really pleased and content with the world like she has just eaten chocolate. 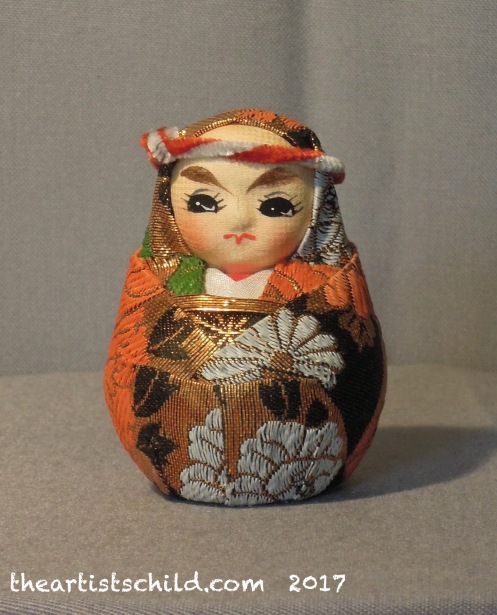 The fabric Daruma doll is a depiction of the founder of Zen Buddhism, Bodhidharma, who meditated for nine years so that his arms and legs atrophied and fell off (for more info on these dolls go here).  His eyes seem to be looking inward like he is in a trance and his mouth seems very determined.  Maybe this expression would indicate quiet reflection if it were an emoji.

The Seven Lucky Gods are popular figures in Japanese art.  You often see depictions of Ebisu in Japanese stores and restaurants because he is the god of prosperity and wealth in business.  Daikokuten is also a god of wealth and a demon hunter while  Benzaiten is the goddess of music and beauty (based on the Hindu Goddess Saraswarti).  Ebisu and Daikokuten have very happy contented expressions, as you would if you always caught the big fish or had a bag of  valuable objects and a mallet for killing demons.   Benzaiten has a wistful look as she plays her instrument.  Useful emoji characteristics.

This pair of kaibina dolls made from clam shells are good luck charms (omamori).  They are covered with Kimono fabric.  The pair are supposed to represent a united couple.  While the female doll looks very happy her male counterpart has quite a sour look on his face.  Maybe this is supposed to be an expression of strength and seriousness but it’s more like he has eaten a bad clam.

Japanese dolls are made from all kinds of materials and display a variety of facial expressions and emotions in a simplified manner.  There is probably a lot of tradition involved in these choices, especially with the vintage dolls.  The pin knitting doll that I purchased new a few years ago seems to have a more modern exuberant face than the older dolls like many emoji.

Whatever the origin and influence of emojis, our brain can make all kinds of visual connections between these and Japanese dolls.  The past appears to influence the present and the present adds to tradition.  That’s the way creativity often works.

Sticking with the Japanese theme I have included a traditional Japanese piece Sakura Sakura (Cherry Blossoms) played on the ukulele and a Japanese animation with the crocheted duo U900 playing the Beatles Twist and Shout on the ukulele.

writes a short story every week