Last weekend in Melbourne there was a bad windstorm and it’s about to get very windy again this weekend. As we live in a coastal city we often experience storms coming in from the bay, especially in early spring when the temperatures are starting to rise and the winds become more severe. These can be frightening but are also inspirational giving us spectacular views of nature at it’s wildest.

The following is a video taken in 2011 of one such storm over Port Phillip Bay with some beautiful photos and vision.

In 2015 during one of these wind events an extreme gust brought down a huge branch of the African Coral tree next door. It broke a part of the fence and just missed the windows of next doors family room giving the inhabitants a huge fright. The following photo shows the size of the branch. Since then they have had the tree pruned extensively as it really sways in windy weather.

Storms have long been an inspiration to writers and artists, especially in the days when travelling by sailing ships, which were constantly at the mercy of the elements. Looking in some of our old books I found some illustrations of storms from the 19th and early 20th centuries. Some of these are for well-known stories while others are more obscure and it is interesting to see the different ways storms have been depicted. Many stories have begun with a shipwreck in a storm as the basis for the drama to follow.

One such is Shakespeare’s play The Tempest. In our 1904 edition of Shakespeare, the storm is depicted as a scene on the ship with crashing waves and a panicking sailor confronting Prospero. Very melodramatic like the stage play it illustrates but not very atmospheric with regards to a storm. You can imagine the stage hands throwing buckets of water and rocking a stage prop ship. 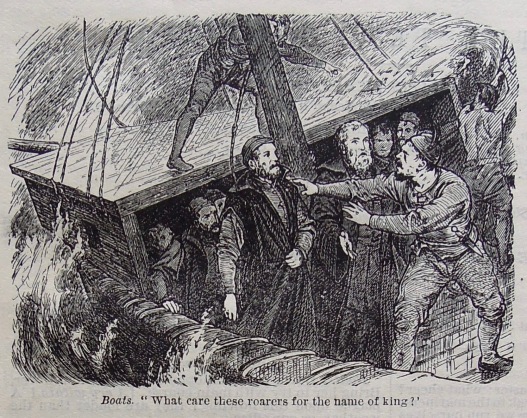 The Tempest, The Leopold Shakespeare, 1904 edition

Two other famous stories with a similar beginning are Daniel Defoe’s Robinson Crusoe (1719) and Johann Rudolf Wyss’s Swiss Family Robinson (1812-13), also about people stranded on supposedly deserted islands. The frontispiece of our 1905 edition of Robinson Crusoe shows the crashing waves while men are being washed from their overturned lifeboat. In the distance is their floundering ship. It’s a wonderfully energetic drawing and conveys the desperation of the situation. The Swiss Family Robinson scene is very atmospheric with foaming waves almost engulfing the ship, its masts broken, as it smashes against towering rocks. It is from an edition of about 1907. 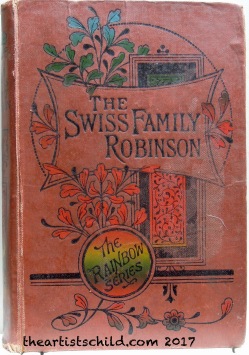 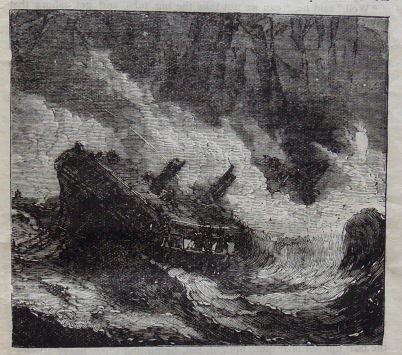 Illustration at this time relied heavily on the engraver’s art, which reached amazing heights in the 19th century. From our 1895 set of Charles Dickens works is a fantastic illustration by Fred Barnard of the tragic storm in David Copperfield (1850), which sees the deaths of both David’s friends, Ham and Steerforth. In the illustration we see Ham, with a group of seaman, about to go out into the stormy sea where you can see Steerforth’s boat and its wreckage. The figure of Ham is a solid presence surrounded by swirling water and foaming waves. It is a masterly drawing where you can feel the tension of a dire situation.

In our collection we also have a couple of less well-known 19th century adventure stories written for children. The first is the Last Cruise of the Ariadne by S Whitchurch Sadler RN (1877). The frontispiece has a wonderful colour scene on a ship in a storm with a group of passengers being drenched by sheets of water. One of them is unconscious or has perhaps drowned. It is a very beautiful and poignant illustration of the perils of a sea journey in the past. You can almost feel the ship being buffeted by wind and water. 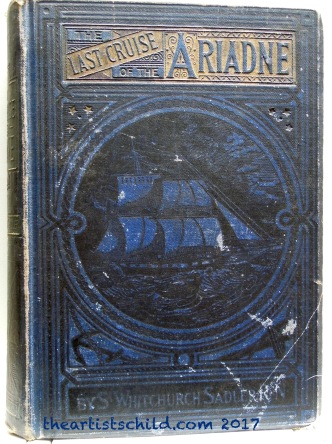 The second book is A Voyage Around the World, A Tale For Boys by W H G Kingston (1880). It is full of the adventures of a couple of boys on a voyage to far away places. They always seem to be involved in some lucky escape, especially at sea. Two illustrations show the young boys bobbing in stormy seas. One includes their companion dog. Real “Boys’ Own Annual” stuff and it would have been exciting in the days when travel was not easy. By the amount of literature devoted to shipwrecks and storms at sea, it is a wonder anyone willingly sailed at all. 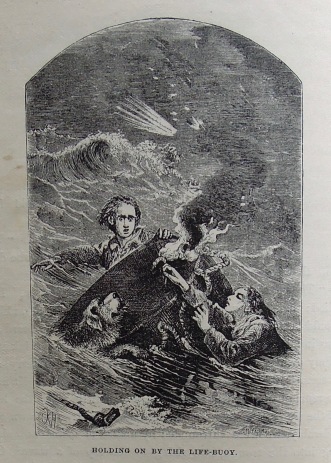 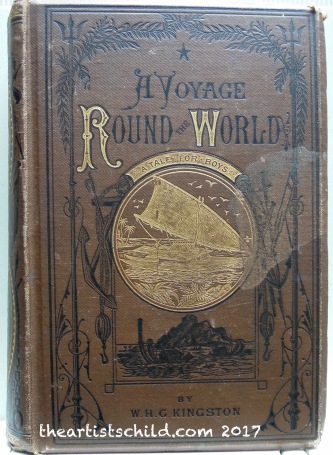 Many visual artist’s are inspired by the wind and turbulent weather. One of the mast famous is the British artist, J M W Turner, who did many paintings of storms. His are some of the most atmospheric works. Churning seas, wind-driven rain and snow swirl around on his canvases and watercolours so that the viewer is caught up in the storm. With just a little paint and skillful brushwork he could say a lot as the following watercolour sketch of a Storm at Sea reveals.

As a child in the sixth grade I did a painting of a storm scene. It was quite unusual for me to do such a gothic work as I usually painted happy pictures and did not like thunderstorms. Maybe I had been watching a scary movie and loved the thought of a castle on “a dark and stormy night.” Or the idea of a windswept sea appealed to me as it has done for countless generations of artists. I have kept some of my childhood art so here it is.

One Dark and Stormy Night, Kat

Wild winds and violent oceans might be dangerous but they can inspire all kinds of art works. What is life without some risk and excitement to get those creative juices freely flowing? But just don’t stand under a tree.

As the wind picks up around our house what better way to end this post than with Buster Keaton battling a storm in Steamboat Bill Jnr.

Looking for horror? ...Come in.