Why is it when you are all fired up to do something creative a situation arises that gets in the way? Yesterday I had planned to do some writing for this blog when our washing machine decided to overflow from the top as well as developing a leak underneath, probably from one of the hoses. Much of the day was wasted with moving the steel bench and it’s contents out of the laundry so that we could get behind the machine to see if it was fixable then trying to find a repair person.

We could not get anyone to come before next Thursday. A plumber had told us to hang onto this older machine for as long as possible because it was very sturdy and he said that with many new models, you were lucky if they lasted 5 years so we want to have it repaired if possible.

As the dirty clothes will pile up, what could we do until then? Luckily Ellie found that we could do our washing if the machine was partially filled and set to the final rinse and spin cycles. This took ages because the leaking water had to be mopped up all the time. After all the things that had been drenched by the overflowing machine had dried out, it all had to be put back into the laundry. Luckily it was a day of 35°C which was great for drying things but not wonderful for staying cool in a crisis. Sometimes life gives you hot Chile peppers like the lethal ones in our garden.

Modern technology can be trying at times but it would be much more time-consuming to do the washing by hand. There was nothing we could do to prevent this annoyance, so I had to accept the fact that it was necessary to focus on the task in hand rather than to do what of had planned. On top of this I could feel the onset of a sore throat (probably from the heat) so decided to have a relaxing evening and not to stress.

On a more productive subject, the papermaking has been going well. We have found that mixing colourful bits of cotton fabric, which has been put through the washing machine and the blender, then mixed with the paper pulp, creates lovely decorative sheets. Below are some examples of Ellie’s work.

If you put some pieces of thread on the surface of the paper after it has been couched onto the wet cloth, press and dry it, then iron the sheet under a damp cloth, when you peel off the thread it will leave an embossed effect.

Putting loosely shredded cotton onto the paper while it is still in the mould will create surface decoration that is pressed in when the paper is couched onto the wet cloth. Here are some of Ellie’s. 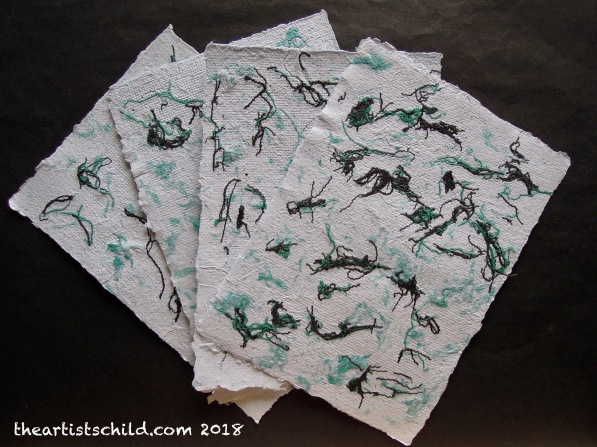 In Australia it is now autumn and we have been having some beautiful sunsets. I photographed one of these from the studio last week and once I downloaded the photo onto the computer I noticed something that was not there when I looked out the window. There seemed to be a large UFO hovering in the sky with another one in the distance. How could this be?

Then I realized that the lights have been on in the studio when I took the photo and were reflected in the window. It was just a trick of the light.

Seeing is not always believing.

Here is a fun song, UFO, from Australian band Sneaky Sound System from ten years ago. It still sounds great.